5 Magical Towns to discover in Oaxaca

Talking about a place like Mitla, is to talk about history, mysticism, tradition and magic; about a place that inhabits in the eternity, where time is diluted to exist in the middle of an atmosphere full of color, smell and taste which allows us to live a past that is present. Thus the greatest charm that Mitla offers to the world is not found in what can be seen, rather it is in everything that is behind, in its past, its history, in that mystic process carried out through the years and that is materialized in each product born in this place. 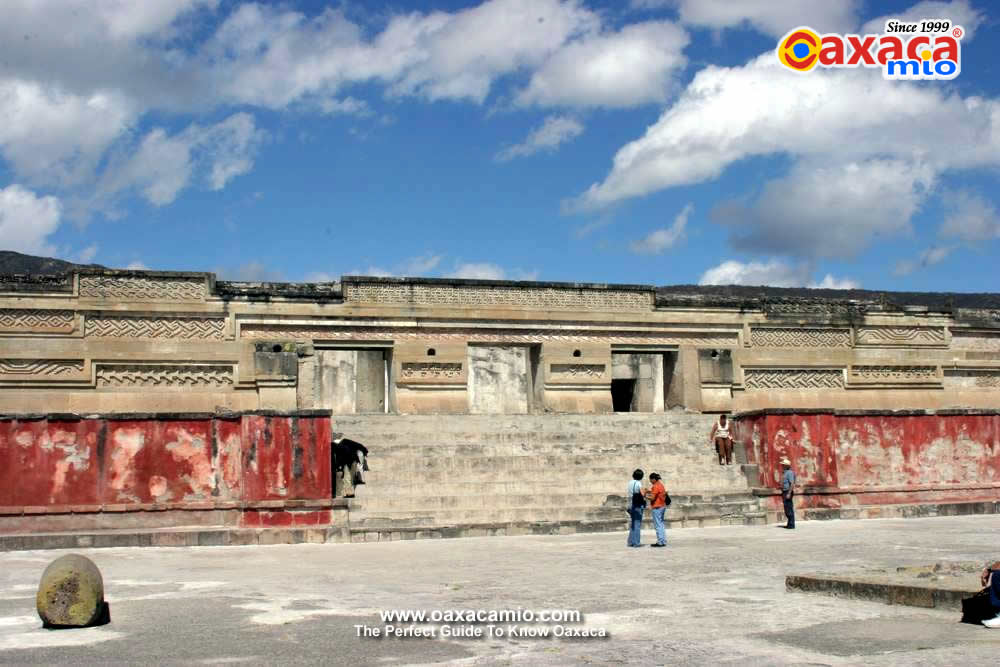 Mitla has been from its origin, a symbol in itself, not a place, rather an entrance, a passageway that has its own life, wrapping with its charm anyone who closes his mortal eyes and opens his heart to begin seeing from the soul, allowing itself to be carried away to that magical place which cohabits in the same space of all the perceptible that many appreciate but few live. The wealth of Mitla is found in the environment, in the surroundings, in the breathing of the legendary air that runs from ancestral times through this place, witnessing the mysteries hidden in the past of the old Zapotecs who currently are the last guardians of the this singular wisdom and that open that door to the whole world; allowing thus to cross the limit between the past and the present, between the old and the modern, between magic and reality, between this life and the other. And is that Mitla is rich day and night, from any point that is admired, by any perspective taken in a photo, because in every view, ritual, act and product has a reason to be, a reason to exist and show it like that.

Xibalba (Quiché), Lyobaá (Zapotec), Mictlán (Náhuatl) o Mitla (Spanish), are some of the names given to the “place of rest”. It was a great City-sanctuary, a religious and civil center, of great preponderance and at the same time national sanctuary. The history of Mitla makes us to go back to the history of an ancient culture, even more than what could become the Zapotec culture, lineage that currently inhabits this important center; since long before this great city became a fundamental part of such a culture, Mitla was already an imposing settlement in which resided power, not only material, such as that possessed by kings and rulers, but one that extended beyond of the limits of life, a power over life and death. Being the official residence of the supreme pontiff, the vicar of the deity, the oracle of faith and the channel through which all grace was communicated from heaven to earth, he also execrated, defaming them perpetually with his curses, or granted them pardons and remissions; that is why among the inhabitants Mitla was called “The palace of the living and the dead”, the place destined for the burial of the Zapotec pontiffs and monarchs, the passage to the next life, "The Great Door to Eternity".

Xibalba (Quiché), Lyobaá (Zapotec), Mictlán (Náhuatl) o Mitla (Spanish), are some of the names given to the “place of rest”. It was a great City-sanctuary, a religious and civil center.

Mitla offers unique settings, among them, is its set of archaeological zones that offer a style different from the characteristic of other cultures, overloaded with ornamental elements, scrolls and reliefs, the style of the constructions is appreciated, where the fret is the predominant element and the exclusive ornamental motif, is quite sober, a universally unique style. An example of this is the construction of the main palace, which begins very tight at the base and widens as it reaches height, completely moving away from the canons established for the erection of all construction, constitutes a challenge to the laws of gravity. It is quite remarkable also, in the buildings of Mitla, the existence of cruciform undergrounds that once served as tombs and precincts for the exercise of rites and occult practices, most of which are unknown and some that are still preserved.

Such is the case of the column of life, in which people can know the remaining years of life; and the stone of the “sentones” in which couples of bride and groom sit certain times to ensure their marriage bond. Another detail related to the buildings and the religious-social function that Mitla had in antiquity is that of the magna, colossal, portentous work of engineering implicit in the construction of the extensive communication tunnel between this town and Monte Albán, this work with an extension of more than forty kilometers, evidencing the extraordinary capacity of the Quiché engineers. Of course the existence of such subterranean conduit is not a legend since there are writings in which an exploration is narrated by a group of Dominican fathers, in which not wanting to venture further into that prolonged cavity propped up by robust pillars, the religious ordered the entrance to be boarded up, to “calicanto”, being ignored since then the location of this. Currently the set of archaeological sites that comprises Mitla is divided in:

There are also important vestiges of the Zapotec culture in the locality of Xaagá, belonging to Mitla. Place that at the moment is an former estate and that owns a cruciform tomb similar to the one that is in the group of the north to which it is possible to descend to feel an air of thousands of years.

The Church of San Pablo Apóstol is also a site very visited, since like everything that Mitla has is a building full of a rich history and mysticism without equal. It is recognized in many books because it is built on the Zapotec ceremonial center from which the material for its construction was extracted. It is also the only Catholic Church that is not located in the center of the town. 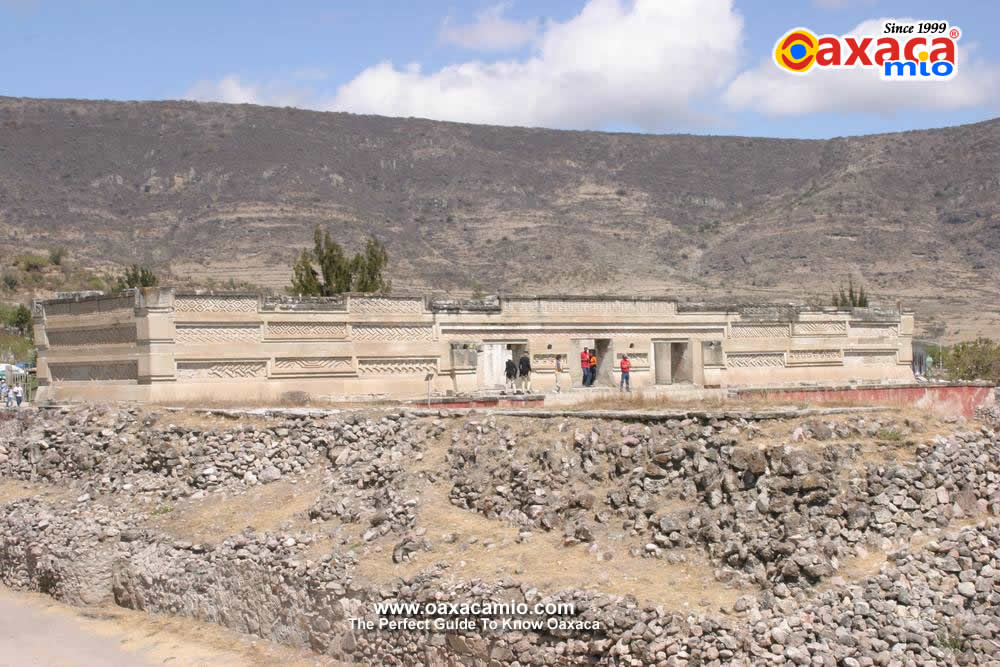 Another building of great importance for the inhabitants of Mitla is the Frissell Museum. Construction that lives in the heart of many Mitleños who grew up with this house, which was originally the Town hall, then the big store, where brides were dressed; and finally a center of knowledge and learning, the place that sheltered one of the ten largest collections in the world related to Zapotec culture and art.

Other sites that do not go unnoticed in Mitla are its caves. Like the caves of Xaagá, which possess inside a valuable variety of cave paintings, elaborated thousands of years ago and that give humanity testimony of its origin as well as being the cradle of corn, the beginning of a domestication that originated life as we currently know it.

Other sites that do not go unnoticed in Mitla are its caves. Like the caves of Xaagá, which possess inside a valuable variety of cave paintings, elaborated thousands of years ago and that give humanity testimony of its origin as well as being the cradle of corn, the beginning of a domestication that originated life as we currently know it. The other cave, even more visited, is the so-called Cave of the Devil, site of the other Lord of Mitla, a place filled with a dark mystery, a place where you can ask for anything with the certainty that it is carried out. By the way, you can also stop to observe the springs of white water that Mitla has, which are reservoirs of water, in which springs a water that, for having a wealth of salts and minerals, acquires a whitish color, as if it were water of “horchata”. And is precisely this water that the inhabitants use to prepare the rich sparkling chocolate of water.

In addition to places full of charm, Mitla is characteristic for possessing the most authentic traditions and customs, some of which are presented in the Fandango Mitleño show or Mitla Weddings, presented at the international event of the Guelaguetza or Lunes del Cerro in Oaxaca, being Mitla cradle of a number of traditions, customs, trades and knowledge that have expanded around the municipality, and throughout the state of Oaxaca

The weddings of Mitla are a very allegorical festivity since it is in this ritual where the food is exposed, which has been from memorable times, the authentic one of Mitla. And being part of the wedding is a delight to the palate with so many millenary flavors, ranging from bitter to sweet and salty, from that delicious autochthonous chocolate made with white water to the strong flavor of a traditional craft mezcal drink and of course very mitleño.

During this festivity that represents an arduous preparation, we also enjoy the rich and varied breads, which are served at a certain time, in a determined and generous portion and with their proper accompaniment. But Mitla's weddings not only mean eating, it's also enjoying the whole party that lasts for days, in which rituals and ceremonies that have been preserved for centuries are held, since this is not only a show mounted but a tradition alive, the model to follow for the current generations in the town. So also the music and clothing they wear is an essential part of what Mitla is.

As part of the inheritance that Mitla has made to the world there are also its handicrafts, the sale of which has been a main source of income for the majority of inhabitants. Originally the textiles that were elaborated in Mitla were made in the waist loom, later they were made in the pedal loom. Currently there are workshops of both, a sample and exhibition to the visitor of great value because you can see the art of the processing itself, since the lamb is sheared to obtain the wool until the garment is available to the user.